This morning marks exactly 90 years since the first camera rolled at Prague’s Barrandov Studio on January 25, 1933. At 9:00 a.m. on this date, cameras began to roll on the Studio’s very first production, Murder on Ostrovní Street (Vražda v Ostrovní ulici).

Barrandov Studio was founded by brothers Miloš and Václav Havel (the father of future Czech president Václav Havel), and named after Joachim Barrande, a 19th century French geologist who had worked at the site where the studio was constructed.

Construction of Barrandov Studio began in late 1931, it was finished in early 1933 and inaugurated with the shooting of its very first film.

Directed by Svatopluk Innemann from the novel by Emil Vachek, Murder on Ostrovní Street premiered just months after it was shot to wide acclaim throughout Czechoslovakia. Thanks to brand new sound equipment at Barrandov, it was the first Czech movie to have both dialogue and music.

In its early years, Barrandov Studio employed around 300 people and shot up to 80 films per year. It was one of the best-equipped studios in central Europe, and immediately began to attract the interest of foreign productions, a trend that continues to this day.

After Czechoslovkia was annexed by Germany in the years leading up to WWII, Barrandov Studio was overtaken by the Nazi regime and became a factory for propaganda films. Among the films made by at Barrandov during this time was Süss the Jew (Jud Süß), which was filmed under the order of Nazi propaganda minister Joseph Goebbels and considered one of the anti-semetic movies ever made.

The Nazis had big plans for Barrandov, and spent four years building three new sound stages across 3.5 square kilometers (37,000 square feet) at the location. By the time construction was completed, however, the war was over.

With Czechoslovakia behind the Iron Curtain and Soviet filmmakers showing little interest in the studio, Barrandov saw little foreign interest over the next two decades. In the mid-1960s, however, talented young filmmakers like Miloš Forman, Jiří Menzel, and Věra Chytilová put the studio back on the map with what would later be termed the Czech New Wave.

Hollywood even came to Barrandov with 1968’s The Bridge at Remagen, though the filmmakers were literally chased out of Czechoslovakia during the Warsaw Pact invasion of the country and had to complete their movie in Italy.

Still, 1970s American productions like Slaughterhouse-Five and Operation: Daybreak were allowed to film in Prague and at Barrandov Studio. In the early 1980s, Forman, who had emigrated to the states, returned to Barrandov Studio to shoot Amadeus, which would go on to win eight Academy Awards including Best Picture.

When the Iron Curtain fell, the floodgates were opened for foreign productions to return to Barrandov Studio; among the first of these were Steven Soderbergh’s visually stunning Kafka, and the TV series The Young Indiana Jones Chronicles, produced by George Lucas and Rick McCallum.

In 1995, the Hollywood blockbuster Mission: Impossible set a new standard for foreign films produced at Barrandov, and would usher in productions like A Knight’s Tale, Hellboy, Casino Royale, and more recently productions like Knightfall (which resulted in the construction of a still-standing medieval village set) and Carnival Row.

Most recently, Barrandov Studio served as a filming location for All Quiet on the Western Front, which received 9 Oscar nominations including Best Picture at the 2023 Academy Awards.

Jason Pirodsky has been writing about the Prague film scene and reviewing films in print and online media since 2005. A member of the Online Film Critics Society, you can also catch his musings on life in Prague at expats.cz and tips on mindfulness sourced from ancient principles at MaArtial.com.

‘Knock at the Cabin’ movie review: The end is nigh – or is it? – in intense Shyamalan thriller 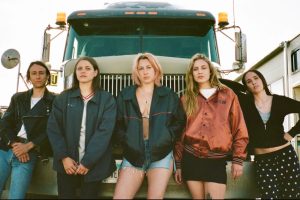 © 2022 The Prague Reporter. All rights reserved.